Good news! I’m happy to report that one of my favorite books, The Time at Darwin’s Reef: Poetic Explorations in Anthropology and History, has just been reproduced by Altamira/Rowman & Littlefield (2003) in e-form for Nook and Kindle. On the premise that there are many ways to see and to say things, and therefore to know them, and noted for blurring the boundaries between the sciences and humanities, the Reef’s crossover appeal has supported its use as a textbook in advanced anthropology and writing arts courses and its overall popularity in individual sales to the public. Clustered around my experiences in the Pacific and Mexico, it represents my take on the nature of time and place and various forms we can use to represent them—poetry, essays, paintings, and more. In addition to poetry turned into history with datelines real and imagined, and much to say about the nature of fiction itself, the collection includes several short essays (notably a widely-reproduced one with associated poetry regarding the tragedies of 9/11), and an integration of the written word with watercolors painted by the late Janie Kelly Brady, my beautiful wife. Now an historical document in its own right, the original result got a bit of a jump on what has been identified and promoted expertly by many thoughtful writers in recent years as Arts-Based-Research (including outstanding works by Monica Prendergast and Patricia Leavy). Thanks again for your support! 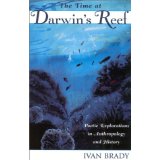 The Time at Darwin’s Reef: Poetic Explorations in Anthropology and History (Altamira 2003)